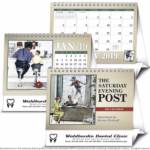 Great for health care, financial and general services. These calendars  feature designs from the classic The Saturday Evening Post.

The Saturday Evening Post is a bimonthly American magazine. It was published weekly under this title from 1897 until 1963, then biweekly until 1969. From the 1920s to the 1960s, it was one of the most widely circulated and influential magazines for the American middle class, with fiction, non-fiction, cartoons and features that reached millions of homes every week. The magazine declined in readership through the 1960s, and in 1969 The Saturday Evening Post folded for two years before being revived as a quarterly publication in 1971. It now appears six times a year.

The magazine was redesigned in 2013.

Welcome to our new site

Welcome! We've rearranged some items, so you may have to use our magnifier search for basic items. If you want specific products - use the search to the right or the one in the left below for product keywords search to find the perfect calendar solution for your business or event.
Go to Top